It is with very great sadness that we announce the passing of Dr. Jay S. Cohen. He was compassionately devoted to his patients and an ardent researcher and author, lately focusing on erythromelalgia and medication side effects. His recent book regarding flouroquinolone side effects is being heralded by the many patients who are suffering with serious, long-term health problems after taking drugs such as Cipro and Levaquin.

Dr. Cohen’s work will continue through the Jay S. Cohen M.D. Foundation, supported by his book sales and donations.

HOW WE CAN HALT THE CIPRO AND LEVAQUIN CATASTROPHE: THE WORST MEDICATION DISASTER IN U.S. HISTORY. Paperback, October 25, 2015 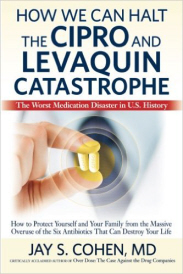 This book is about the powerful, sometimes lifesaving, yet sometimes highly destructive antibiotics known as fluoroquinolones. Best known of these drugs are Cipro (ciprofloxacin) and Levaquin (levofloxacin), as well as four others. The book has two main goals. The first is to alert patients and doctors of the truly destructive capability of these drugs to cause serious, sometimes long term, sometimes permanent injuries. The capacity of these drugs for such damage has been attested by the U.S. Food and Drug Administration and others many times and is now incontrovertible. Hundreds of patients, many of whom are quoted in this book, have confirmed their long-lasting injuries, while many hundreds more have been ignored or dismissed by their doctors. This must stop. Ignoring these problems has only made them worse.My second goal is to stimulate the interest of government, the drug industry, medical institutions, and others for any and all ideas regarding remedies, solutions, and ideas that may help end the suffering experienced by patients with the Fluoroquinolone Toxicity Syndrome (FTS). FTS can affect many human systems including the musculoskeletal, nervous, psychiatric, gastrointestinal, and others. As you will see, I have offered some ideas for therapies that may provide benefit to some of the injured. It is imperative that we follow a trail that may lead to an understanding of how these drugs work and particularly how they injure. Most of all, we must help people heal, obtain pain reduction, and hope. Thousands of lives, young and old, depend on our efforts.

FLUOROQUINOLONE TOXICITY SYNDROME: A LETTER TO THE SENATE COMMITTEE ON HEALTH, EDUCATION, AND LABOR.

Biorhythms and Erythromelalgia: Why EM Symptoms Worsen in the Evening and at Night.

The Medical Treatment of Erythromelalgia (updated January 2012).This rare and disabling disorder can now be treated effectively in many cases.

SEVERE REACTIONS TO LEVAQUIN, CIPRO AND OTHER FLUOROQUINOLONE ANTIBIOTICS: ARE DOCTORS IN DENIAL?

Sexual Side Effects from Antidepressant Drugs: Treatments that May Help.

New Report: Akathisia Related to the Use of Cipro.This serious side effect needs to be added to Cipro’s product information.

The Crestor for C-Reactive Protein Study: Limited Benefits and Serious Risks. What are the implications as doctors place millions of patients on this powerful, cholesterol-lowering statin drug?

A REPORT OF MAJOR IMPROVEMENTS IN A CASE OF FLUOROQUINOLONE TOXICITY.A man reports 95 percent improvement after finding an effective treatment 3 years after a severe reaction with Avelox (moxifloxacin).

Tim Russert: Would Fish Oils Have Saved His Life?When Russert, the political commentator, died suddenly at the age of 58, people were surprised. Unfortunately, there should be nothing surprising about sudden cardiac death.

Why Some Generic Drugs Do Not Work: A Rare Interview with Joe and Teresa Graedon of the People’s Pharmacy.

Statin Side Effects: Do Doctors Take Patients’ Complaints Seriously?A new study reveals what happens when patients complain of statin side effects to doctors.

Lariam: Why is this High-Risk Drug Still Prescribed to Consumers Now that Safer Anti-Malaria Drugs Exist?

High-Dose Lipitor For Strokes: How Effective, How Safe? A new study of high-dose Lipitor for people with strokes reveals minimal benefit and unanswered questions about safety, yet doctors are prescribing high-dose Lipitor to more patients.

A Preventive For Alzheimer’s Disease? Another powerful study shows a markedly reduced risk of Alzheimer’s with fish oils (omega-3 oils).

The Medical Profession And The Culture Of Corruption, Part 2:Just How Tainted Has Medicine Become? Another top medical journal asks a tough question about doctor-drug industry conflicts of interest.

The Medical Profession and the Culture of Corruption, Part 1: Respected Physicians Call for End of Conflicts of Interest with Drug Industry.

High-Dose Lipitor For Heart Attacks: How Effective, How Safe?   A new study shows benefit, but also serious risks. Dr. Cohen explains who should use high-dose Lipitor — and who should not.

Crestor Side Effects Make More Headlines — But Underlying Causes and Preventive Measures are Again Ignored. A new study shows higher rates of adverse reactions with Crestor than with other statins.

NEW WARNING FOR CIPRO, LEVAQUIN, AND OTHER QUINOLONE ANTIBIOTICS Serious reactions continue to be reported. This article is an updated version of my original article on reactions to fluoroquinolone antibiotics.

Bextra: Designed By Pfizer to Fail.  An open letter to Pfizer Inc. on the underlying reasons why Bextra was withdrawn.

What Now for Users of Vioxx, Celebrex, and Bextra? How to use anti-inflammatory drugs (NSAIDs) more safely — and natural alternatives that work.

Why Antidepressant Black-Box Warnings Aren’t Enough: What Doctors and Patients Can Do to Use Antidepressants Safely. A FDA Advisory Committee Recommendation for stronger warnings is a step forward, but not a solution.

Workplace Stress, Depression, and The Overuse of Antidepressant Drugs In The Workplace. An Interview with Richard Lippin M.D., an Expert on Occupational and Environmental Medicine.

The Truth About Crestor: Is Crestor Dangerous, And If So, Why? The intensive marketing of this new, super-strong, cholesterol-lowering statin drug raises questions and concerns.

Patients Regain the Right to Control Their Own Medications. Your consent is now required before your medications can be switched.

The Underlying Cause of Suicides and Homicides with SSRI Antidepressants: Is It the Drugs, the Doctors, or the Drug Companies? How a dysfunctional medical-pharmaceutical complex causes and perpetuates unnecessary harm.

Dr. Cohen Debates The FDA. Dr. Cohen and Dr. Robert Temple, the FDA’s top medication expert, squared off again at the Meeting of the American Society for Clinical Pharmacology and Therapeutics.

Interview with Bill Faloon of Life Extension Foundation.  A recent clash with the FDA places the spotlight on the largest research and anti-aging organization in the U.S.

An Open Letter to the U.S. Food and Drug Administration on Serotonin-Enhancing Antidepressants in Youngsters. There is a reason that serotonin-enhancing antidepressants (SSRIs) are repeatedly linked to suicides and homicides, and there is a solution to this problem.

Antidepressant Side Effects: A Doctor Describes Her Adverse Reaction to an Antidepressant Drug. Dr. Cohen explains how to prevent SSRI reactions.

How Low Should Cholesterol Lowering Go? While new studies encourage the aggressive use of statins, patients continue to balk. Why?

An Open Letter To Congress on Severe, Disabling Reactions with Cipro, Levaquin, and Other Fluoroquinolone Antibiotics. Why hasn’t the FDA acted?

Prilosec OTC: When to Use It Instead of Other Over-The-Counter Heartburn Remedies? What the Product Label Doesn’t Tell You.

Seniors, Side Effects, and Celebrex: Does This Strong, One-Size-Fits-All Drug Put Seniors, Women, And Others At Unnecessary Risk?

Suicides and Homicides in Patients Taking Paxil, Prozac, and Zoloft: Why They Keep Happening — And Why They Will Continue

What Now for Women Who Benefit from Hormone Replacement Therapy (HRT)?

The HRT (Hormone Replacement Therapy) Debacle and What it Says About Drug Safety in America. New studies link the hormones in Prempro and Premarin with cancer and heart disease, yet why were three generations of women exposed before discovering these risks?

Serious Reactions Associated with Cipro, Levaquin, and Related Antibiotics. Since the publication of my article on Cipro’s side effects in 2001, I have received hundreds of reports of devastating reactions linked to fluoroquinolone antibiotics.

Prescription Drug Use in America: The Startling Numbers and Their Implications. During 2002, Americans filled 12 prescriptions for every man, woman, and child.

Chocolate: A Health Food? Can we believe a recent study’s claims about the benefits of chocolate?